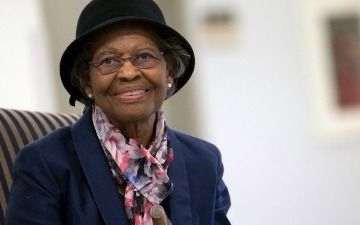 Dr Gladys West was born in 1930, in Dinwiddie County, Virginia. As she calls it, it's "a real rural kind of a place".

The many families in the area were sharecroppers - tenenats of a farm who had to have over the proportion of their crops to landowners.

Her family had their own small farm and she had to work in the fields with them.

"I guess I found that a little bit contrary to what I had in my mind of where I wanted to go," she says.

She realised that the way to change her path was through education, and people who came top of their class at her school were offered a scholarship to the local university. Knowing this, she worked hard, and graduated top of her class in high school.

"When it was time to go to college, I didn't quite know what to major in," she says.

"They were trying to tell me, since I was good at all my subjects, that I should major in science or math or something that was more difficult and meant people didn't major in it."

She landed on Maths, which was statistically studied by men at the college.

"You felt a little bit different. You didn't quite fit in as you did in home economics.

"You're always competing and trying to survive because you're in a different group of people."

Of the few females classmates she had, many went on to pursue careers such as teaching - as did Ms West for a while, untill she moved on to work at the Dahlgreen Naval Base.

Here, she spent her time collecting data from satalites, processing that data, and using it to determine their locations in a very exact manner.

It was this information that would go on to help develop GPS.

She would work with the programmers of the massive computers on base, assisting with the functions that they needed to perform.

She says, "The operators would call us to tell us our programme was running now and we could come down and watch it."

Like any science, her work has been built upon in the decades since, helping us to develop a full Global Positioning Satalite System available to the public for everyday use.

The next time you use Google Maps, Apple Maps, Waze, a TomTom or any other SatNav, don't forget about the amazing woman, and the amazing mind, behind the technology.

Please agree to the conditions first.

Please agree to the conditions first.

Before you continue to the site

You can make your choice below and modify them at any time by going to the "COOKIES MANAGEMENT" section at the bottom of the page of the Site. Your choices are kept for a period of 6 months.